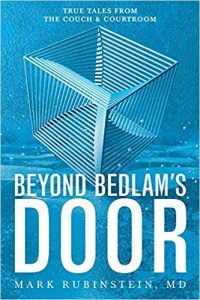 What drove a psychiatrist to enlist a patient in a plot to murder six people?

What was the secret bargain struck that allowed a 104-year-old woman to live such a long and productive life?

Why would a woman refuse to emerge from the confines of her bedroom? And after treatment liberated her, why did she suddenly take a turn for the worse?

In Beyond Bedlam’s Door, former practicing psychiatrist Mark Rubinstein takes you outside the hospital and into his world of private patients, nursing home residents, and the challenging legal system in which he worked as a forensic expert. As in Bedlam’s Door, great lengths were taken to preserve people’s anonymity, but the raw truth of each story remains intact. The resiliency of some individuals and the venality of others are laid bare in these pages.

Beyond Bedlam’s Door invites you to meet twenty-one unforgettable people. Some stories will disturb you, others will make you smile, but all will give you a deeper appreciation of what it means to be human.